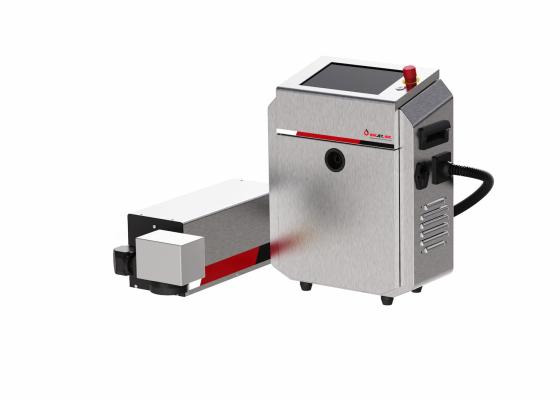 Designed to create ultra-fine markings at high speeds, the F8100U UV laser marking machine is the optimal solution for today’s most demanding coding applications. Able to place high-contrast markings on a wide variety of materials, this industrial marking system is ideal for meeting stringent traceability requirements and anti-counterfeiting policies

Reinforced with an IP54 outer structure and capable of uninterrupted operation for up to 24 hours a day, the F8100U provides reliability as well as speed and accuracy in traditionally challenging environments.

The F8100U marking system is designed to deliver the kind of ultra-fine, high-speed marking required to meet industrial production quotas and comply with strict traceability requirements. Built with a 355nm UV laser, the F8100U is able to mark everything from the flexible film on the outside of tobacco packaging to painted metal surfaces and electrical components.

This diverse substrate compatibility enables the F8100U to fulfill a wide range of coding needs, including those held by the food/beverage industry, pharmaceutical developers, and aerospace/automotive manufacturers.

By investing in the F8100U, companies benefit from:

The F8100U’s diverse substrate compatibility, high-contrast marking capabilities, and non-stop operation make it the ideal marking system for demanding coding tasks. From UDI-marking and QR code printing to variable data coding and beyond, the F8100U provides users with the physical specifications required to apply required markings onto products with maximum efficiency.

For a better understanding of the F8100U’s capabilities, consider the chart below to understand the system’s full technical specifications:

In a world of increasingly strict traceability requirements and pervasive counterfeiting threats, it’s essential to have a powerful coding system in your operation. With the help of the F8100U UV laser system, you can achieve code compliance and thwart counterfeiting efforts while still maximizing operational efficiency. Call InkJet, Inc. today to find out more about how our marking solutions can improve your coding processes.

We also use analytics & advertising services. To opt-out click for more information.